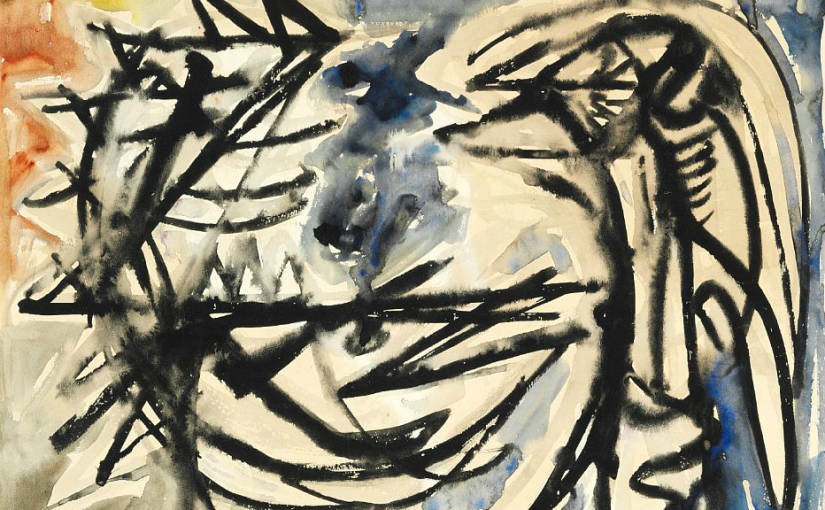 The Danish artist Asger Jorn (actually Asger Oluf Jørgensen but he changed 1945 his last name to „Jorn“) was born 1914 in Vejrum in Struer.

As kid, he received private painting lessons from the painter Martin Kaalund-Jørgensen and he mainly draw landscapes and portraits. Then in 1935 he painted his first abstract paintings where he got inspirat by the ornamental art of the Vikings. At college he joined the the Communist Party of Denmark.

In 1936 he traveled to Paris to become a student of Kandinsky and after he attended at the Fernand Léger’s Académie Contemporaine. He examines the abstract paintings by Wassily Kandinsky and works of the surrealists (specialy Max Ernst, Joan Miró, and Paul Klee). Soon later on Jorn held many group exhibitions and solo exhibitions in different galleries.

At the occupation of Denmark by Nazi Germany jorn feel in a strong depression. Then he became very active in the communist resistance movement and was also co-founder of the art journal (underground art group) Helhesten (hell-horse). A journal with topics like artistic freedom and challenge of Nazi propaganda and the Danish government’s policy of cooperation with Germany.

One of his most impresive essays in Helhesten was „Intimate Banalities“ which claimed that the future of art was kitsch and praised amateur landscape paintings.
After the war, he complained that many Communist were against the opportunities for critical thinking and he complained against the increasing political control by the Communist Party. Therefore he resigned from the Communist Party.

In 1948 he traveld again to paris and become one of the founding members of the european avant-garde art movement CoBrA and he was mainly responsible for the edition and design for the journal CoBrA.

1951 till 1953 he created poems and essays on art from and 1954 he released his first art book called Helg og Hasard (Salvation and Coincidence). at the same year Jorn and Enrico Baj found the Mouvement International pour un Bauhaus Imaginiste.

A stir was his rejection of the Guggenheim Prize in 1964th with this letter to the president of the Guggenheim:
GO TO HELL BASTARD—STOP—REFUSE PRIZE—STOP—NEVER ASKED FOR IT—STOP—AGAINST ALL DECENCY MIX ARTIST AGAINST HIS WILL IN YOUR PUBLICITY—STOP—I WANT PUBLIC CONFIRMATION NOT TO HAVE PARTICIPATED IN YOUR RIDICULOUS GAME.

In 1960 jorn started to make drawings over cheap department store paintings, which he did for a reevaluating of bad taste and kitsch.

An other very intresting fact is that his works are till now mostly in hands of european art dealers, museums and galleries. This is because jorn refused to fly to america because he did not wanted to visit to a country where visitors had to sign before a statement maintaining that they were not communists. He traveled to the us only one time for the Lefebre Gallery opening.